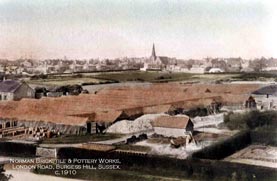 William Norman (1781-1849) was associated with potteries in both Burgess Hill and Chailey for many years, being the founder of the works in Burgess Hill, and joint partner of the Chailey Works with his brother Richard (1792-1835). Barbara (1796-1867), the widow of William Norman, continued the brickmaking and pottery works in Burgess Hill on land now bounded by London Road, Station Road and Church Road, known locally as The Brow, from 1849 to 1855 when her sons, Richard and Nathan, took over the business which in later years was managed by Richard and Edgar, their respective sons. After 118 years of brick and pottery making, the land and premises were sold in 1930 to Burgess Hill Urban District Council. The land comprising some 24 acres, mostly remained undeveloped until the Martlets new town centre was built in the early 1970s.

William Gravett (1787-1872), a potter and farmer originally from Westmeston settled at Purchase Farm on Ditchling Common in 1818 and probably started commercial production at those potteries soon after. He retired in 1853 and the Ditchling Common potteries were then managed by George Chin(n)ery. By 1861 there were nineteen people employed at these works which mainly specialised in the manufacture of terracotta products. His son John was also proprietor of the pottery works at Burgess Hill for some considerable time and John’s son Henry (1858-1931) continued to manage the works until 1909 when the premises were closed due to the clay supply having been entirely exhausted. The premises were later bought and used by Ernest West, a timber and haulage contractor.

William Meeds (1835-1904) and his brother Frederick (1839-1899) became partners in the brickmaking and pottery works established in Station Road about 1848 by their father James Meeds (1812-1890). They were partners for more than twenty years until Frederick retired. William who lived at Brooklyn, Station Road, took charge of the business thereafter known as W. Meeds and Son, which in 1904 passed into the hands of William’s younger son James “Ernest” Alfred Meeds. Thomas Holman, nephew of William Meeds, became a later manager of the works which were believed to have remained in the Meeds family ownership until about 1924, following which other personnel continued the works for a further 15 years. Brickworks were established north of the Victoria Pleasure Gardens on the western side of the old London to Brighton road and extensive potteries were developed on the southern side of Station Road, the entire works being known as St. John’s Original Brick, Tile and Pottery Works. After many years of successful production Meeds Potteries were closed by 1940 and the premises remained derelict until 1954 when the site was cleared for redevelopment.

In 1873 Sampson Copestake, a merchant and senior partner of the firm Copestake, Hughes, Crampton and Co. in Cheapside, London, bought the Ditchling Common brickyard. The manufacture of terracotta products continued under the management of Henry Johnson (1840-1885) who was resident at Ditchling Common potteries. Soon after the purchase of Ditchling Common potteries, Sampson Copestake also acquired Cant’s and Inholmes farms, which by 1875 were transformed into brick and tile works, leased to Henry Johnson and known by the name of Johnson and Co. These works were developed on a very large scale, at one time employing some 300 people and Benjamin Stuart, partner of Henry Johnson, assisted with the running of the entire brickworks. Production was on such a vast scale that the Lewes branch railway line was extended into the works by means of a siding which facilitated transportation of coal into the works and manufactured goods away from the works. A further development included the building of cottages for employees, school houses and a direct road link, namely Inholmes Park Road, which led directly to Inholmes Mansion from Junction Road (formerly Cant’s Lane), crossing over the railway via a bridge constructed specially, but long since demolished. Inholmes Mansion and Wynnstay (both demolished) were built and at sometime occupied by Sampson Copestake. Henry Johnson, originally resident at Ditchling Common brickyard, eventually moved to The Lawns, a large villa in Keymer Road and now part of the school Burgess Hill Girls.

In April 1883 however because of a landlord and tenant disagreement concerning rent and royalties, the entire stock of products at Keymer Junction was sold by auction followed by a similar sale at the Ditchling Common potteries. The works then remained derelict and in May 1884 a disastrous fire destroyed much of the Keymer Junction brickworks causing some £10,000 – £15,000 damage.

The Keymer Junction works were rebuilt some time after the fire, at first on a small scale, then gradually developing and later becoming the property of the Keymer Brick and Tile Company, who continued to manufacture until 2014.