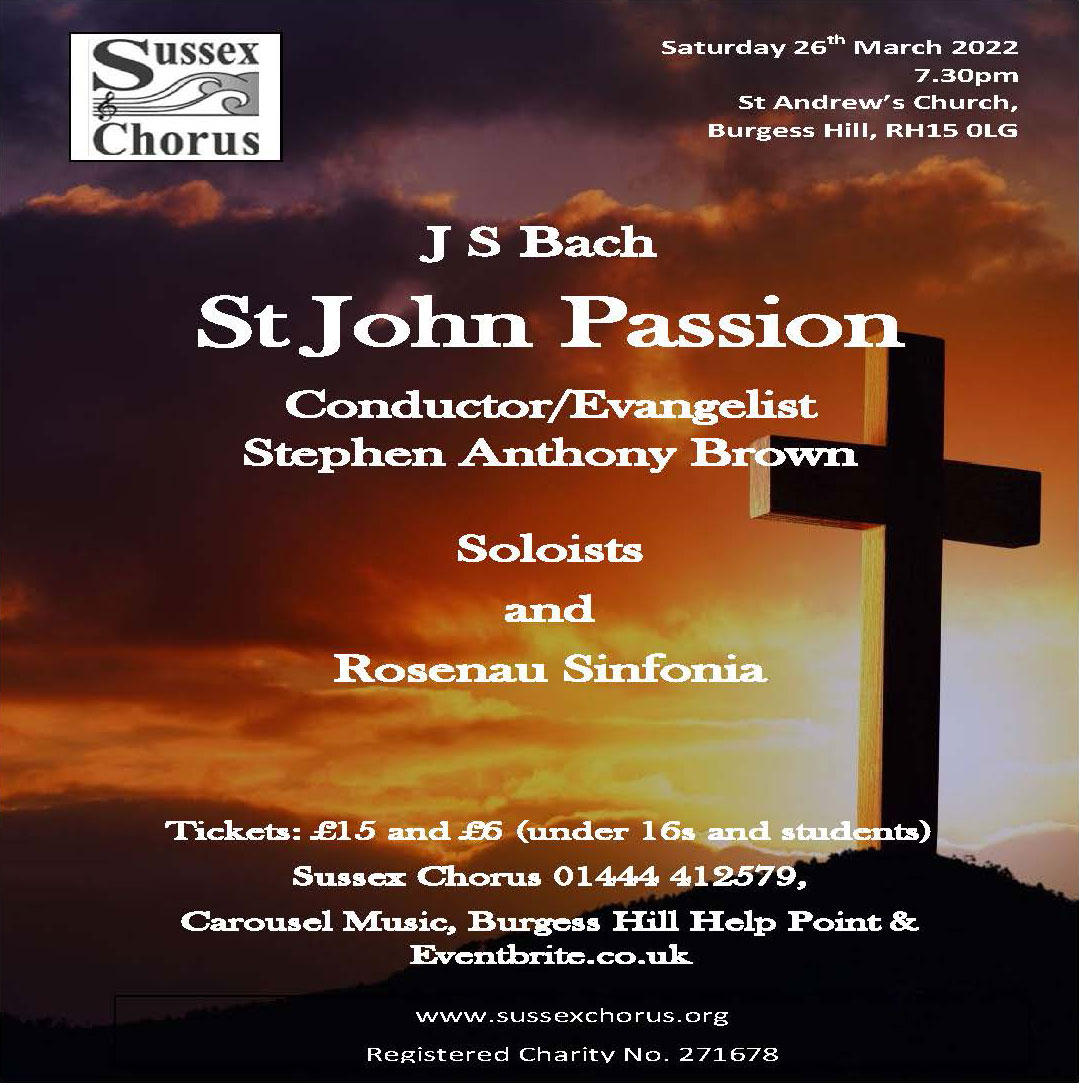 Bach’s two surviving musical settings of the Passion of Christ rank among the very cornerstones of western musical art. He poured his enormous genius and expressive powers into magnificent settings of the passion story from the New Testament, and we are lucky that both the settings of St Matthew and St John’s versions survive.

The music of the St John Passion is often considered the more extravagant, the more immediately expressive of the two; beginning with Jesus’s arrest in the garden of Gethsemane, through his trial and to his eventual crucifixion.

The Sussex Chorus are delighted to be offering an unusual way to present this work with a more dramatic performance than usual. Stephen Anthony Brown will sing the role of St John the evangelist, atmospherically guiding as narrator while also conducting the choir, orchestra and soloists as they expertly become the characters in the story.

This very unusual and immersive concert is sure to leave a lasting memory of the dramatic and moving power of music in the hands of the master Johann Sebastian Bach.

The Sussex Chorus will be joined by the Rosenau Sinfonia.

Tenor – Stephen Anthony Brown (Evangelist), a sought-after evangelist, having performed this role in some of Europe’s most prestigious venues and orchestras

Bass Baritone – Latvian-born Pauls Putnins (Jesus) is one of the busiest baritones in the UK with a very impressive range of international appearances.

Baritone – Jon Oppenshaw (Pilate) is classically trained and now based in Horsham. He has an ever-growing repertoire of operatic roles and oratorio solos working with a number of opera companies.

Tenor – Ted Black was born and raised in London and is a member of the International Opera Studio at the Royal College of Music. He was a finalist in the 2020 Kathleen Ferrier Competition.

Soprano – Rosanna Harris graduated with distinctions from the Royal Northern College of Music She sang with Sussex Chorus at their Christmas Concert 2021, and we are pleased to welcome her back to the St John Passion.

Mezzo Soprano Helena Cooke graduated from the University of York in 2015 with First Class Honours. Since then, she has sung with numerous groups and consorts and performed with choirs including the Philharmonia Voices and BBC Daily Service Singers,

This concert is sure to leave a lasting memory of the dramatic and moving power of music in the hands of the master Johann Sebastian Bach.

Back to What's On