The following information has been kindly supplied by Lesley Urbach.

Between 1 January 1939 and sometime in 1940/1941 up to 50 Jewish girls from Germany, Austria and Czechoslovakia stayed at Wyberlye Ladies Convalescent Home in Burgess Hill. The Convalescent Home was run by the Grand Order Sons of Jacob, a Jewish Friendly Society. 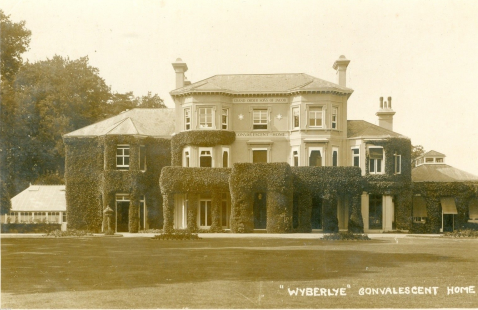 What were Friendly Societies?

Friendly Societies were popular before the rise of the National Health Service and originated in the late seventeenth century.

Their object was primarily one of mutual benefit. In return for weekly contributions, members would receive support during illness or in the case of their death. In the latter instance, societies would contribute to the costs of funeral and tombstone expenses and, in some cases, provide payments to the family of the deceased. Friendly societies acted as miniature social security systems which were entirely private and voluntary. Many friendly societies also served a social function by holding regular meetings and social events for their members.

Jewish friendly societies played a particularly important role in Anglo-Jewish life during the late 19th century and through much of the 20th century. They helped the immigrants who came from Eastern Europe between 1880s and early 20th century settle into Britain.

Grand Order of Sons of Jacob

The Grand Order of Sons of Jacob was founded in 1900. The ‘glory years’ were those of around 1920 to the outbreak of World War 2 in September 1939. During that time, new Lodges came into being in London, Leeds, Manchester and Glasgow. Convalescent homes were acquired in the Home Counties. One of these convalescent homes was in Burgess Hill at Wyberlye House.

Members paid a shilling a week which entitled them to medical attention and burial rights.  Membership topped 5,000.

At the end of 1938 the AGM of the Grand Order Sons of Jacob agreed to allow Jewish girls who had come or were coming via the Kindertransport from Nazi-occupied Europe to stay at the convalescent home, which was not fully used at the time. However, the convalescent home would continue to operate.

The Grand Order pledged itself and its respective Lodges to provide funds to support the children.  The expectation was that they would look after the children for at least a year. The children began to move into the home on 1 January 1939 and my mother and sister – Eva and Ulli Wohl – who had arrived from Germany on 15 December 1938, were among the first children to move in. My mother had just turned 16 and my aunt was just 13 years old. They had left their parents and older sister in Berlin to come to Britain on the Kindertransport.

Life for Jews in Germany and Austria November 1938

The evening of 9 November and the day of 10 November 1938 saw violent attacks on Jewish businesses, synagogues, property and people in Germany and Austria which became known as Kristallnacht (Night of the Broken Glass) because of the sound of breaking glass. 26,000 Jewish men were arrested and taken to concentration camps where they suffered appalling treatment. This was an extremely frightening experience for the Jewish community in both countries.

This was the culmination of 5 years of increasing anti-Jewish laws and decrees which had seen German Jews and, after March 1938, Austrian Jews, isolated socially, ruined economically and deprived of their citizenship. Nazi laws defined anyone with 3 or more grandparents as Jewish and those with fewer than 3 Jewish grandparents were still affected by some aspects of anti-Jewish laws and actions.

Austrian and German Jews rushed to move to other countries but were generally met with closed doors. The world did not want Jews or other penniless refugees. The main way adults could come to Britain were as domestic servants because there was a shortage in the country. 20,000, mainly women, came in this way, including one of my aunts. Otherwise they were not wanted as they were seen as competition to the British labour force. Some came on an agricultural visa and if they were able to show they could set up a business that would employ staff. Generally, for any adults allowed in there was an expectation they would re-emigrate as soon as possible.

On 21 November 1938 the House of Commons debated the refugee crisis and it was agreed that children, aged initially under 17 and later under 16, could come to Britain from Nazi-occupied Europe as long they came without their parents and were of no cost to British tax payers. £50 (equivalent of £3,200 today) had to be paid for each child – this was for the cost of their re-emigration. It also had to be shown they were going to be supported while living in Britain.

Children travelled by train to the Hook of Holland and then by boat to Harwich, Essex. From there they went to private homes and hostels and other such places around the country. The experiences of the children varied from very good to very bad.

The first train left Germany on 2 December 1938. Between then and the start of the Second World War on 1 September 1939, just under 10,000 mainly Jewish children came from Germany, Austria and Czechoslovakia without their parents. It was organised by Jewish and non-Jewish groups and individuals. The majority did not see their parents again because their parents were murdered by the Nazis and their collaborators.

My mother (aged 16) and her younger sister (aged 13) came on the Kindertransport, arriving at Harwich, Essex on 15 December 1938.  They left their parents and sister. My mother recalls feeling excited about the new life ahead and not understanding they would not see their parents again and my aunt remembers crying all the time. As my mother said, it was dreadful for their parents.

They often recalled the tearful parting from their parents on the platform of the train station in Berlin. Parents were then banned from going onto the platform.

My mother and her sister stayed at Dover Court, a holiday camp in Harwich that was closed for the winter, for three weeks. (It is where the 1980’s sit com, Hi de Hi was filmed). It was a very cold winter and they were freezing.

The Grand Order Sons of Jacob agreed to provide refuge for Jewish girls from Nazi-occupied Europe at its AGM at the end of December 1938. Around 50 Jewish girls stayed at the home. The Matron of the Convalescent home looked after the children. My mother recalled her telling girls who said they couldn’t do something she had asked them to do, that there was no such word as I can’t in English.

My mother and aunt spoke about what a beautiful House Wyberlye was. It was like a stately home. And they emphasised how well looked after they were by the Grand Order of the Sons of Jacob during their stay. The older children, like my mother, were expected to help in the house. Younger children attended local schools and this included my aunt. They had to go out walking around the town on Saturdays and Sundays and were not allowed back until late in the afternoon. My mother said there was little to do in Burgess Hill on a Sunday. My aunt remembers going to the cinema from time to time.

The Convalescent Home continued to operate so the children were only allowed on the ground floor of the House. My mother spoke about the beautiful stairs, which were later ruined by the Canadian soldiers who were housed there after February 1941.

The Military Authorities requisitioned the Premises in early February 1941 and the Refugee children staying at Wyberlye were returned to the Central Movement.

It is hoped there will be a commemorative project about the presence of the refugee children at Wyberlye House, funded by the Heritage Lottery Fund, involving children from Burgess Hill Academy and primary schools in Burgess Hill. A commemorative plaque has been placed at Marle Place near the site of the original house and grounds. 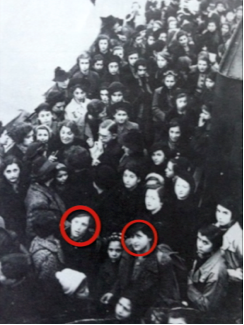