It's Christmas in Burgess Hill

Come on down to Church Walk from 12pm – 6pm, on Saturday 19 November as we step into Christmas, with a whole range of magical activities and entertainment!

There will be lots of exciting entertainment on our stage, with performances from local choirs and community groups. This will be opened by our special guest… Tom Ball! Following his success on Britain’s Got Talent, Burgess Hill local, Tom, will be opening the event in style at 12pm.

While the music plays, you can enjoy the bustle of our mini-Christmas market and marvel at our street entertainers!

Returning from last year is the Imperial Outlanders! Star Wars and Marvel characters will mingle between the crowds; as puppets Hodman and Sally, and walkabout magic from Poi Passion promise to entertain!

Go head-to-head with your friends at Reindeer Roll-a-Ball, before immortalising your win at our Christmas themed photobooth, which will be in operation in our Help Point from 1.30pm – 4pm!

If you love crafts, Same Sky will also be in attendance with some fabulous Lantern Making sessions! Booking is essential, so don’t delay! You can book online via our Ticketsource by clicking here or by calling 01444 247726. There is a 10am session for those with SEND (Special Educational Needs and Disabilities), this is only bookable via the Help Point, either in person, or by calling 01444 247726. 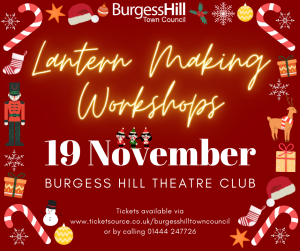 We all know that Christmas is not complete without a visit from Santa… There will be a festive Grotto for children to visit Santa and get a small present on the day! Running from 12pm – 4pm, this grotto will be supported by Central Sussex Rotary, Burgess Hill and District Rotary and Burgess Hill District Lions.

Don’t miss out on this amazing event, and look out on our social media by clicking here for more information about It’s Christmas!

The festive spirit was all around as the Town Centre bustled with activity, with stalls selling handmade Christmas gifts, food and drink, and running festive games and competitions. The Town Council was happy to host local Community Groups to fundraise and promote themselves, and a selection of local traders too. Santa Claus himself also made an appearance, talking to children at a mobile Santa’s Grotto, run by local charity The Budding Foundation.

For many, the highlight of the day was meeting Star Wars heroes and villains, thanks to the Imperial Outlanders, a group of passionate cosplayers who bought the characters to life. There were Troopers marching the streets of Burgess Hill, Chewbacca towered above the crowds, and there were even sightings of The Child (aka Baby Yoda) in tow with the Mandalorian. Town Centre traders were delighted as the characters made visits, spreading the cheer throughout the town. Quiet Meet and Greets were also arranged – one mother said ‘Thank you so much for arranging a meet and greet session for my autistic son. He was beside himself with happiness. The whole day was brilliant.’

The Town Council is hugely grateful to the Imperial Outlanders for spending their Saturday with us.

The event centered around the stage, with performances throughout the day from Haywards Heath College, St Paul’s Catholic College, Choir and Ko, Mid Sussex Brass Band, Rock Choir, VB Dance and Burgess Hill Academy. Local performer Tobias Alexander also took to the stage, performing a set of Christmas classics, before returning to host the switching on of the lights.

Then, to top off a brilliant day, the moment the crowd had been waiting for – the big countdown to the reveal of the Christmas Lights! The lights were jointly turned on by nominated Community Heroes, all of whom made contributions to the Burgess Hill community during 2020 and 2021 – Kieran Thompson, the Burgess Hill Spiderman, Julia Rye of Respect Youth Club, Karen Taylor of Escape Youth Club, representatives of the Burgess Hill Pantry and the Burgess Hill Community Food Bank, DJ Graham Meeres, and Ken Saunders, President of the Burgess Hill District Lions Club. Also selected as Community Heroes but unable to attend were Jackie Cooper of Burgess Hill Youth, and Martyn and Marie Jupp of Jupps Fish and Chips. The day ended with a spectacular performance from The Scarlet Elves, who put on an LED Light Show with Poi, Hula Hoops and a CYR Wheel, all choreographed to festive tunes.

Town Mayor Anne Eves said: ‘Looking down from the stage at five o’clock, all I could see was a river of people, stretching right back up to the top of Church Walk. One man who has been working in a restaurant on Church Walk for the last seven years said he had never seen such numbers. It seemed like everyone, children and adults, had their photo taken with the Outlanders (Star Wars characters): many thanks to them for interacting with so many people, inside shops and out on the street. Huge thanks to the Town Council’s officers who spend months planning these free events.’ 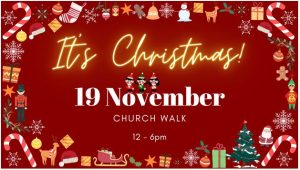 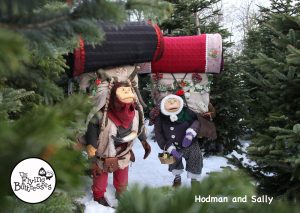 Picture of Hodman and Sally 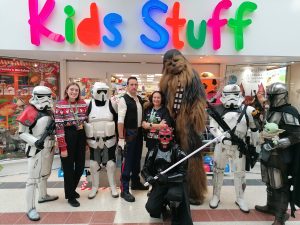 Picture of the Imperial Outlanders 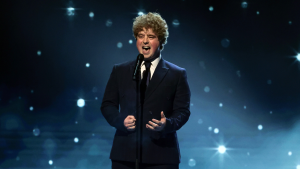 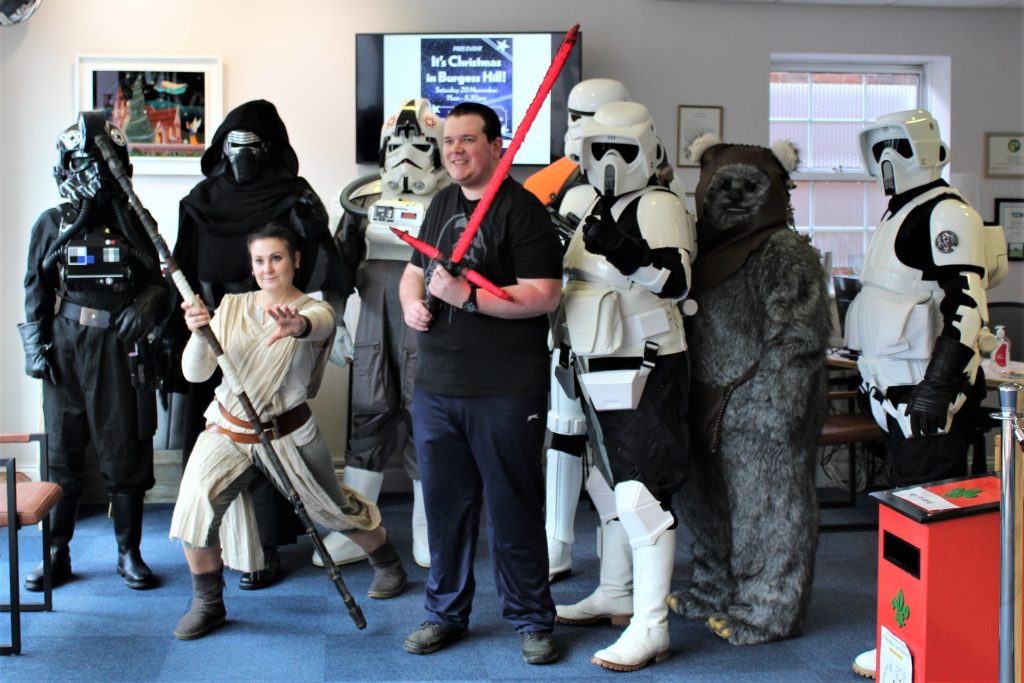 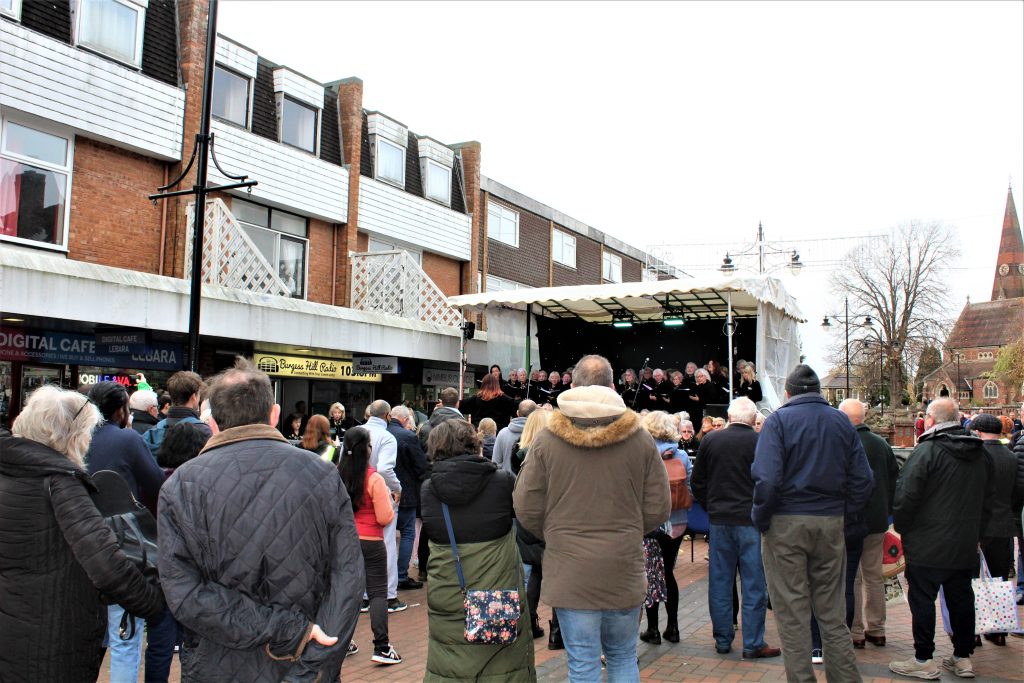 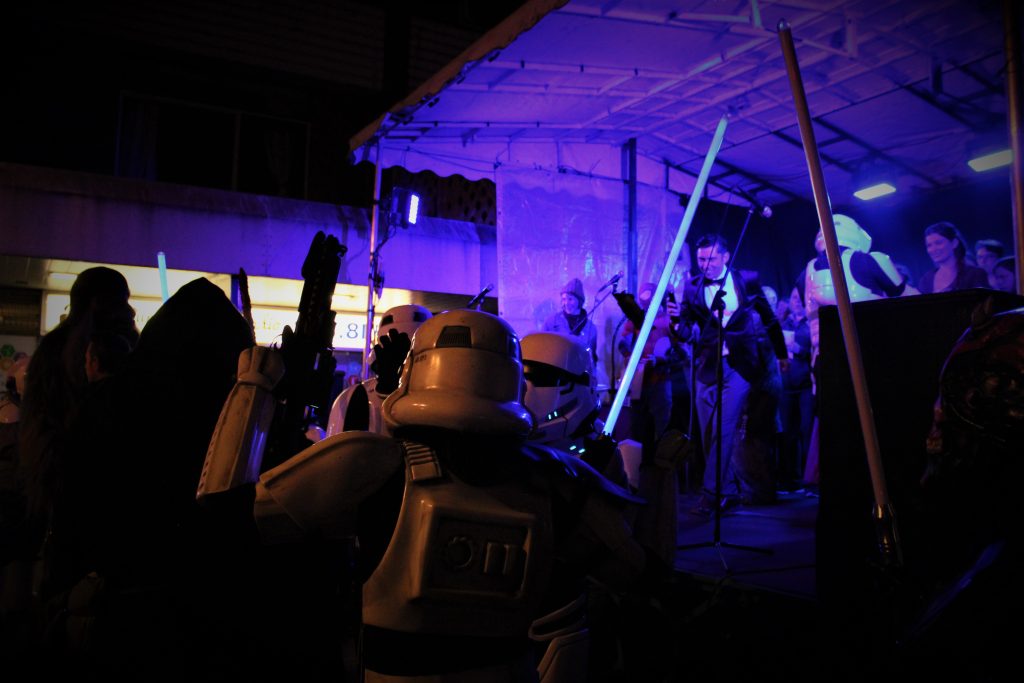