EARLY TIMES
Burgess Hill grew out of the ancient parishes of Clayton and Keymer, both Saxon settlements and mentioned in the Domesday Book. The name is almost certainly derived from that of the Burgeys family who were taxed here in 1296, 1327 and 1332 when the name of John Burgeys appears on the Subsidy Rolls. 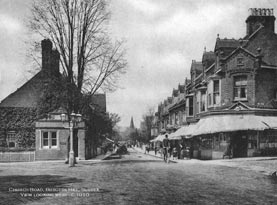 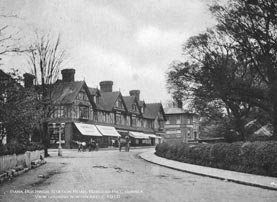 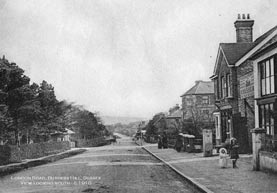 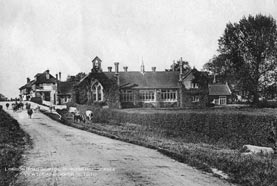 FARMING COMMUNITIES BEFORE THE VICTORIAN PERIOD
The whole area was dependent upon agriculture. As well as the two villages there were many farms scattered across the parishes, of which a number of farmhouses still stand within the town boundaries. To the south and a few yards to the west of the London Road is Hammonds Place, this was substantially rebuilt by the Michelborne family in 1565 but retains part of an earlier structure dating from the 1500s. Pollards Farmhouse and part of Freckborough Manor House, on the eastern boundary, date from Tudor times. Grove Farmhouse, a little further to the east and south of Station Road, can be dated to about 1600 and was built at roughly the same time as Farthings in Keymer Road. Chapel Land Farmhouse is probably the oldest building dating to about 1480. Fowles Farmhouse (now called Old Timbers) was built about 1588. High Chimneys in Keymer Road (once called Woodwards) and West End Farmhouse were built during the late 17th and early 18th centuries. The Burgess Hill Farmhouse and outbuildings were demolished in 1958 and the car park opposite Wolstonbury Court now stands on the site. The farmlands covered the whole of the area which now contains the Chanctonbury Estate and Oakmeeds Community School. The area around the school buildings, surrounded by oak trees, was once a large pottery works owned by the Meeds family, hence the derivation of the name Oakmeeds.

EDUCATION
The first National School was opened about 1838 in a disused stable, moving diagonally across the London Road to occupy the corner of Pottery Lane (Station Road) and London Road in 1850. Mr and Mrs Henry Breed and their daughter Esther were the first teachers. Among its pupils have been Vallence Jupp, the Sussex and England cricketer, and Donald Sinden, the actor. Junction Road (Manor Field) School opened in 1890 and there were a number of private schools many of them taking boarders.

ST JOHN’S COMMON
Here, from the 14th century, was held the annual St John’s Sheep Fair on St John the Baptist day, June 24th, until it finally ceased in 1912. Brick and tile manufacture was established in the 17th century and, during the Commonwealth several small parcels of Common land were granted to enterprising men anxious to build themselves a house and start a small business. By the early 18th century four shops and one or two alehouses had been established on, or immediately adjoining, the Common where a number of craftsmen – smiths, wheelwrights, weavers and shoemakers – also plied their respective trades. It was the enclosure of St John’s Common (the part in Keymer in 1828, and that in Clayton in 1855) together with the opening of the London, Brighton and South Coast Railway in 1841 that paved the way for expansion and led to the birth of the town as we know it today.

THE RAILWAY AGE
The building of the railway started in 1838 and cut through several farms including Peppers Farm in Lye Lane (Leylands Road), Yew Tree Farm, Anchor Farm and Burgess Hill Farm. Between 1850 and 1880 the area changed from a relatively quiet rural backwater into a country town with a population of about 4500. Almost all the solid Victorian middle class houses built in the second half of the 19th century have survived, as have most of the terraced workmen’s cottages now modernised and providing a standard of comfort far beyond the dreams of their former occupants. St John’s Chapel, in Lye Lane, was built by public subscription in 1829 as was St John the Evangelist in 1861 (consecrated in 1863). St Andrews was built later in 1908 but was established in a school room in Cants Lane from about 1880.

THE VICTORIAN TOWN
During the Victorian period brick and tile works spread throughout the town, many sites of these old works are now occupied by garages and builders merchants’ yards. The leading businessmen decided that there should be a Local Board which was formed in 1879. Soon after the Board was formed, roads were made up and brick pavements laid down along the principal roads. Electricity and gas arrived, a proper sewage system was laid down and the town enjoyed a new image as a healthy town. A health hydro was opened at Wynnstay and people came to Burgess Hill to be cured of ailments. Businessmen from Brighton occupied large family houses and commuted to Brighton on the train; their houses, needing several servants, provided an additional source of employment.

THE VICTORIA PLEASURE GARDENS
Mr Edwin Street, a local farmer and butcher, opened the Victoria Pleasure Gardens in 1897. He had dammed a stream to make a large lake on which he had a pleasure steamer and rowing boats. There were swings and roundabouts, a switchback railway and bicycles and roller skates could be hired. Sunday School outings came from all over southern England to enjoy themselves during the summer and if the lake froze over in the winter there was ice skating to enjoy. The gardens were finally closed in 1939 and the lake was drained in the 1970s to extend the Industrial Estate.

RECREATION
The Burgess Hill Town Football Club was formed in 1882. Cricket was played in St John’s Park. Many other activities including concert parties were held at the St John’s Literary Institute (Park Centre), built in 1872 and given to the town by Madame Emily Temple. The Institute also housed many other events including religious and political meetings. One notable visitor was Doctor Barnado.

THE TWENTIETH CENTURY
The period between 1900 and 1939, broken only by the cessation of building operations during the Great War (1914-1918), was one of steady growth in residential accommodation mainly along existing roads. From 1952, when Second World War (1939-1945) controls on building were lifted, and strict planning and building regulations came into force, large scale expansion once more began. This process has continued with no significant break to the present time. The population almost doubled to 14,000 between 1951 and 1961. Much of Burgess Hill’s residential housing dates from this time, with the Martlets Shopping Centre added in 1972. An Industrial Estate was developed during the 1950s on the site of the Victoria Pleasure Gardens and another has developed to the north of the Sheddingdean Estate, named after a nearby 17th century farm. Local authority services were provided by Burgess Hill Urban District Council, formed in 1894, and East Sussex County Council. In 1974 local government reorganisation and boundary changes moved the town into West Sussex and the newly formed Mid Sussex District Council took over many of the old U.D.C. duties. The Burgess Hill Town Council, set up in 1974, has the status of a parish council but nevertheless performs a valuable function in protecting and promoting interests of the residents by acting as a focal point for the expression of local opinion.

More major redevelopment followed in the 1990s with the creation of the Indoor Market Place Shopping Centre; the construction of the Jane Murray Way and the A2300 Link Road to the A23/M23 to the west of the town; the Triangle Leisure Centre, opened by Her Majesty the Queen in 1999; not to mention several hundred new homes. The town is vigorous and thriving, boasting a population of over 28,000 and well set to move with the times, as it always has done, with great success.

In 1979, in response to the rapid development of the town,  Burgess Hill History Society (as it was then called) began to record and preserve the remnants of the town’s past. Over the years the Association has collected a large assortment of artefacts. Many are on display at Southdowns Heritage Centre. Also Burgess Hill Museum which is currently housed in Cyprus Hall and is open before Burgess Hill Heritage and History Association’s monthly meetings.

A short video of Burgess Hill’s Coronation Celebrations in 1953 can be viewed on the BFI website for free. 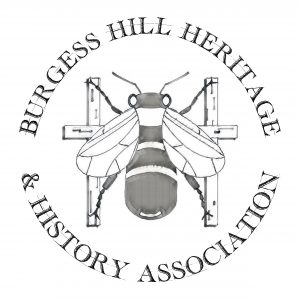