The Green Circle Public Art Trail aims to enhance public enjoyment and understanding of Burgess Hill’s beautiful Green Circle Network while celebrating the locality and the achievements of some of it’s noteworthy inhabitants. The project is funded by Section 106 money (from local developments) designated solely for public art.

Burgess Hill Town Council invited submissions for five commissions which were awarded in December 2016. Each artist exhibited their design in January 2017 at the Market Place Shopping Centre, Burgess Hill, and the feedback given was looked at by both the artists and steering group. The artists have participated in public workshops during the Burgess Hill Summer Festival and in local schools and colleges. The project has been overseen by the Public Art Steering Group which consists of representatives from the Friends of Burgess Hill Green Circle Network and the Burgess Hill Local History Society, local Councillors, Burgess Hill Town Council and Mid Sussex District Council officer(s).

The Artworks were installed during September 2017 and the project was formally opened by HRH The Duke of Gloucester on 2nd October 2017. Click on the coloured links below to find out about each sculpture and artist. 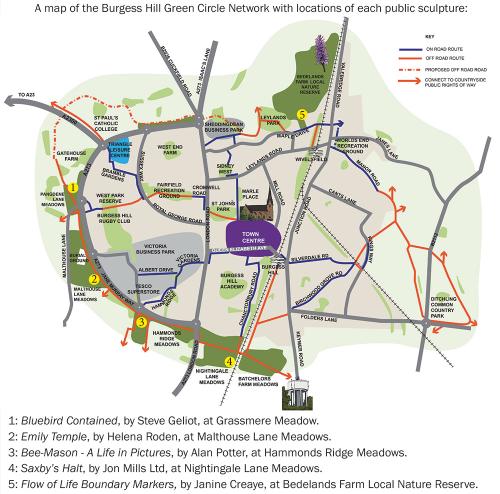