At 33 hectares, Bedelands is the largest green site in Burgess Hill. There are seven meadows set in ancient woodlands, with a great profusion of bugs, birds, bats, amphibians and mammals including the protected Hazel Dormouse and Great Crested Newt. Wildflowers are abundant, so much so that the Millennium Seedbank and High Weald Landscape Trust both harvest seeds here. The site is an SNCI (Site of Nature Conservation Importance) Valebridge Common Meadow at Bedelands was designated a Coronation Meadow in 2013. Plants include bluebells in woodland, adders tongue fern, wild service tree, locally rare sedges, ancient hornbeam and yellow rattle.

The River Adur and a large Mill Pond run along the northern boundary, with the London – Brighton railway along the eastern side. There are a few smaller ponds, as well as a fenced Dipping Pond, complete with platform, which is frequently booked by children’s groups and schools. This beautiful site is regularly enjoyed both by local residents and by visitors from further afield. 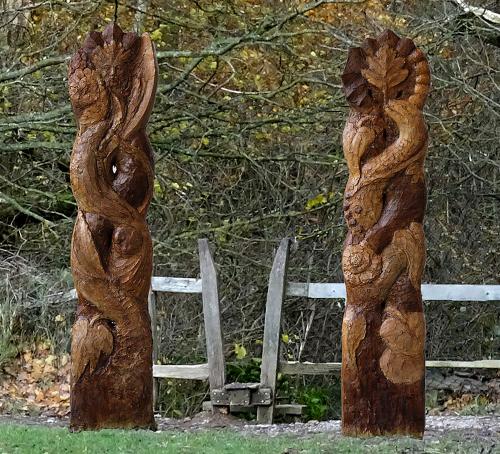 My carvings always have accessible figurative elements but are stylised and symbolic to evoke curiosity about natural sites. I want the carvings to be strong sculptural forms from a distance, but more detailed and intriguing close up. I use some machinery to speed up the first shaping and make coherent forms, but everything you see when it is complete is hand carved, showing the patterns made by the different hand tools that I use. All my outdoor carvings are in green oak and some have darker stains to help make elements stand out. One third is in the ground to secure them and they have not been stolen or significantly damaged in over 20 years of working this way for public sites. I use preservative on all the wood and aqueous bitumen on the transition area into the ground to prevent deterioration. They are finished with a number of coats of Danish oil which slow down any shrinkage or splitting. They can be re-oiled periodically or left to silver after they are complete.

I have been working full time as a visual artist since 1983. I work in a number of different ways but each is an extension of drawing and a response the contemporary world. The choice of subjects is what I find unavoidably engaging and so calls me to make a response. After study work in 2 dimensions, I produce sculptures by carving wood or stone or constructing in wire and cement. I often cold cast the cement sculptures into bronze and treat it with a copper and acid solution make a rich texture and color.

My primary subjects are the human head in stylized, symbolic form or interpretations of natural forms. This may be figurative in the form of lizards, cats, insects, horses in action, or more abstracted as shells, fish and stylized foliage. I am most influenced by Medieval Gothic as well as traditional Indian design and interpretation.  In these works the aim is often to bring attention to fascinating but commonly seen natural forms in a styled extraordinary way.