The building of the London and Brighton Railway started in 1838 and the first station at Burgess Hill was opened in 1843. Between 1840 and 1880 the area changed from a collection of isolated farms into a country town with a population of about 4,500.

One of the earliest forms of railway signaling is the semaphore which was patented in the early 1840s. The first railway semaphore signal was erected on the London Brighton and South Coast Railway (LB&SCR) in 1842 and it soon became the most widely used form of mechanical signal. Two accidents took place on the LB&SCR during the early 1850s due to signaling failures and John Saxby, a LB&SCR carpenter, became interested in railway safety. In 1856, he patented a form of mechanical interlocking between points and signals.

The first fully interlocking frame was installed by Saxby at Keymer Junction in 1860, where he built a small workshop to undertake private work. In 1862, he left the LB&SCR and formed Saxby & Farmer which became the major contractor responsible for building signal boxes as we know them today. John Saxby died in Hassocks and is commemorated with a modern plaque in Brighton Station.

Jon’s bench is made in forged and welded steel, then shot-blasted, hot-zinc sprayed and powder-coated. 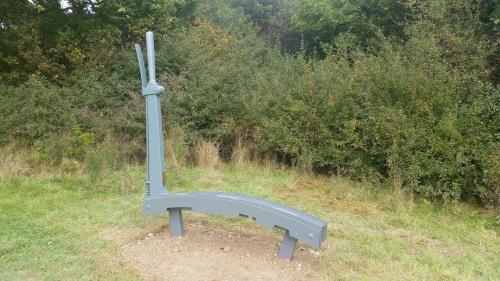 Transport heritage is of particular interest to me and I have fabricated and installed many public art works over the last 30 years. Most of them have responded to local themes, be they historical, architectural or environmental. This commission allowed me to develop very specific imagery around an engineering theme. My work often mixes sculptural form with function, be it way-marking, seating or gates with railings.

Born in Birmingham in 1959, Jon Mills studied 3-Dimensional Design BA (Hons) at Wolverhampton, where his father, grandfathers and various ancestors had all plied their trades in a broad range of metalworking disciplines. Now based in Brighton, Jon produces metalwork of all shapes and sizes, from hand-held objects to large civic statements; but whether it be a functional local authority commission (such as a bridge or a chandelier), a piece of sculpture or an automaton, his witty personable style is immediately apparent. www.metaljon.com